A deep dive into the origin stories and day to day lives of those that have turned their passions into a reality by founding and nurturing creative and originals startups.

Submit Review
9 Available Episodes (9 Total) / Average duration: 00:44:56
Date Duration Most Reviewed Highest Rated
All episodes
9 Available Episodes (9 Total)Average duration: 00:44:56
Mar 28, 2018
Glamazon: Lauren Silvers & Lisa Maree on counting your blessings
00:36:42
Oh, how we’d kill to be business savvy and sharp as a tack. Thanks a lot, genetics. Sure, many of us have had that 3am chat with our buddies about a killer business idea that’s pure fire, only to never discuss it again out of fear of failure and a lack of actual know-how.
While the idea of starting an entire company from the ground up sounds daunting to us regular folk, Glamazon founders Lauren Silvers and Lisa Maree have dived in head first, both pursuing separate ventures before finding each other to create Glamazon as a powerhouse duo.
Described as a “real-time platform for at-home beauty appointments“, it’s much easier to compare Glamazon to the likes of Uber in terms of its setup and user interface. Chatting to the Founders University Podcast, Lisa breaks down Glamazon in layman’s terms.
“Our technology’s pretty similar in that a customer can select the level of stylist that they’re after; Glam X or Glam Black, junior or senior, and then that booking request will go out to a number of stylists that match that request, and the first one to hit accept wins the job.”
The pair has since discovered the beauty in having a business partner, as Lauren found her experience up until the inception of Glamazon quite isolating at times.
“I always wished I had one because it’s a lonely journey and it’s difficult and you go through this rollercoaster…the highs are really high and no one can relate, and the lows are so low and no one can relate.”
For the entire breakdown, have a listen. Your rich self in 10 years will be kissing your shoes.
Mar 15, 2018
The Collective Hub: Lisa Messenger on life's perfectly illogical twists & turns
00:58:07
Take one flick through the pages of Lisa Messenger's brainchild mag The Collective and you'll know that the publication is unparalleled in the print game and makes you walk away feeling motivated instead of trying to comprehend Hollywood's latest love triangle.
In this week's episode of Founders University, Lisa explains that the dream wasn't so clear cut, and that her path from horse riding instructor to working in real estate, sponsorship and event management, to Editor In Chief of The Collective was one hell of a winding path.
"I think people often expect that there’s a linear path to where you land, " she explained. "In isolation not one single thing makes any sense whatsoever to own a global media brand, but, when I kind of go back through it all - and this is probably what’s really important for the listeners - it all kind of makes perfect sense in its illogical nonsensical kind of way, and not just in a business sense but also personal things that I’ve come up against."
"I mean, I’ve been through a divorce, I gave up drinking thirteen and a half years ago, so it’s all those things that you can either choose to pull you down or go, 'Actually, that freaking fuels me.' Because it’s from those things and those pain points, where I’ve actually utilised them to learn that resilience and push me harder."
Make sure you listen to the podcast for the rest, because there's plenty more where that came from.
Mar 01, 2018
Young Henrys: Beer baron Oscar McMahon talks the perfect pour and near death experiences
00:56:11
If you live in Sydney‘s Inner West and ask someone what Young Henry’s is, you’ll get a slap on the wrist pretty quick smart. The local brewery has celeb / cult status in its home turf of Newtown, and is quickly making its mark throughout the rest of Australia as well. You know what – screw it – they’ve also got recognition globally. Don’t believe me? Bloody 90s brothers Hanson dropped in during their world tour last year.
Look! Here they are! Being all grown up and hot! I can totally sleep at night knowing they were just a few doors down from me on this day!
Anyway, back to the point. On top of this blast from the past, the beer company has also become big on collabs as of late – including but not limited to tinnies with The Dunies, Foo Fighters and more. It’s a nod to the huge influence music has had on the company.
During our Founders University Podcast, Young Henry’s Co-Founder Oscar McMahon explained to P.TV‘s Chris Wirasinha that music has played a massive part in his life path. You see, the reason Oscar started working in bars was because he was in a band, and the hours just made sense. From there, his interest in frothies grew.

“I really enjoy being there when people are either having that drink that wipes away their day, or they’re commiserating or they’re celebrating. You know, when you’re working at a bar you get to see people at their best or at their lowest – it’s a really interesting set of human interactions which I really, really love.”
“And funnily enough, through bartending I actually ended up falling in love with beer and booze, and met Richard Adamson who ended up becoming co-founder of Young Henry’s. I met him over a bar [Glebe‘s Roxbury Hotel around 8 years ago], so, I guess in a weird way, music has defined me as a person.”

From there they used to gather in the back room as part of a beer club, with about 120 people having genuine interactions around the wonderful thing that is beer. Over a few too many one night, Oscar explained, “Rich said something to the effect of, ‘How good would it be to create a beer company that was in touch with the people as beer club is?'”
They followed up on it the next day; the concept of a local brewery that reflected peoples tastes, and two years later they were in business. How’d they get from that to this widespread recognition they have now? Make sure you listen to the full interview.
Feb 19, 2018
Fluffe: Fairy-floss founder Nathan Hunter on succeeding as a business newbie
00:46:09
Experiencing the sugary fluffiness of fairy floss died at the same point we were able to stay awake past 8.30 p.m. Us big grownups don't indulge in the beautiful nostalgia of fairy floss nearly as much as we could / should. Thankfully for us Peter Pan types, Nathan Hunter has made fairy floss great again with his start-up Fluffë, and anyone who can do that is A-OK in Pedestrian's books.
"I started developing made-up logos and brand identities for fake businesses. One of them was a fairy floss business because that's not really a thing I've ever seen and, I don't know, I just sort of thought of what this business would offer - I always get a bit attached to things and I sort of, lose time investing in it. I thought about it, [and] thought about it, and asked for a fairy floss machine for Christmas and tested it out."
Nathan's only in his early twenties and has a inspiring nonchalance about getting to where he has. "I was like, this could turn into something - and if it didn't turn into something, I still had a fairy floss machine and I could still make myself fairy floss, which was still pretty cool so I was like, I don't know how I could lose." That's the kind of optimism we need in our lives tbh.
If you're an aspiring hustler who wants to see the bright side of things when it comes to the hardships of starting a biz, you should for-sure listen to Nathan's tips in the latest ep of our Founders University podcast. In addition to his taking-it-as-it-comes attitude, he also discusses handling copycats and navigating regulations and legal whatnot.
Feb 01, 2018
F45: Rob Deutsch on building an international fitness phenomenon
00:31:31
Rob Deutsch, alongside his business partner Adam Gilchrist, have pretty much nailed the formula to scaling a franchise-based operation – and the results speak for themselves. As it stands, they’ve sold 900+ studios globally. That’s impressive in its own right, but it’s the speed in which this growth has taken place that’s truly remarkable, achieved in just four years. Four. Goddamn. Years.
That growth means F45 is comfortably the fastest franchise rollout in Australia ever, enabled it to nab the mantle of the fastest growing fitness franchise globally, and fourth fastest growing franchise in the world full stop.
Jan 18, 2018
theright.fit: Taryn Williams on disrupting the entire influencer & talent industry
01:02:25
Taryn Williams founded theright.fit to help creatives connect with work without all the headaches that have risen with the advent of social media.
Technology threw a spanner into the works for businesses seeking all the humans necessary to pull together a branding campaign during the rise of platforms like Instagram/LinkedIn, and it took a while for things to ‘catch up’ to these advancements.
In Australia, theright.fit has literally been an embodiment of ‘catching up’ happening within the industry – solving issues like late payments, scheduling and a whole lot more for both organisations and talent.
Jan 04, 2018
Investible: Millionaire Creel Price talks startup strategy and how you can join the Entreprenaissance
00:42:32
Millionaire Creel Price started Investible almost a decade ago, investing in what are now some of the biggest startup companies in the world.
Price was the Australian captain in the World Elephant Polo Championships, has climbed several of the world’s highest mountains, been dubbed, “the living, breathing definition of an entrepreneur” by Sir Richard Branson (just casually) and, to put it plainly, made a hell of a lot of money.
In this episode he explains why you need to find your magic metric of measurement, how the propaganda around coding is a bit overkill, what entrepreneurship skills need to be taught in schools, looking beyond the typical hubs of investment and much, much, more.
Dec 19, 2017
Showpo: Jane Lu on building a $30million+ fashion empire
01:09:12
Jane Lu launched Showpo in 2010 when she was just 24 years old.
Showpo is an Aussie fashion retailer aimed at women 16 to 32 that is a multi-million dollar success story about to clock up its millionth online order.
Jane recently featured on the AFR Young Rich list with an insane personal wealth of $32million.
Jane talks candidly about everything from failing in her first business, to exact revenue figures as she was starting up and a Facebook marketing hack that saw her increase her fans by over 5,000%
Dec 14, 2017
Welcome to Founders University
00:01:38
Welcome to Founders University, your chance to get into the nitty gritty with Australia's leading business and startup entrepreneurs and take your side hustle to the next level.
Mar 28 | 00:36:42
Glamazon: Lauren Silvers & Lisa Maree on counting your blessings
Mar 15 | 00:58:07
The Collective Hub: Lisa Messenger on life's perfectly illogical twists & turns
Mar 01 | 00:56:11
Young Henrys: Beer baron Oscar McMahon talks the perfect pour and near death experiences
Feb 19 | 00:46:09
Fluffe: Fairy-floss founder Nathan Hunter on succeeding as a business newbie
Feb 01 | 00:31:31
F45: Rob Deutsch on building an international fitness phenomenon
Jan 18 | 01:02:25
theright.fit: Taryn Williams on disrupting the entire influencer & talent industry
Jan 04 | 00:42:32
Investible: Millionaire Creel Price talks startup strategy and how you can join the Entreprenaissance
Dec 19 | 01:09:12
Showpo: Jane Lu on building a $30million+ fashion empire
Dec 14 | 00:01:38
Welcome to Founders University
This podcast could use a review! 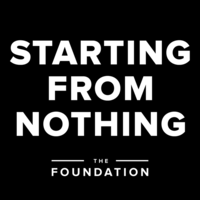 Starting from Nothing - The Foundation Podcast | Building your business ENTIRELY from scratch.
Andy Drish: Co-Founder at The Foundation 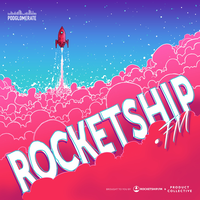 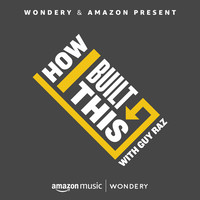 How I Built This with Guy Raz
Wondery 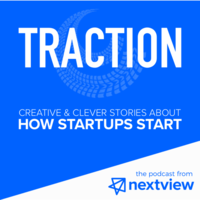 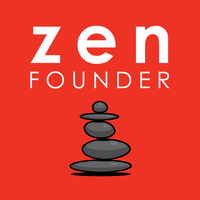 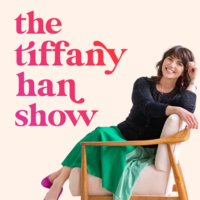