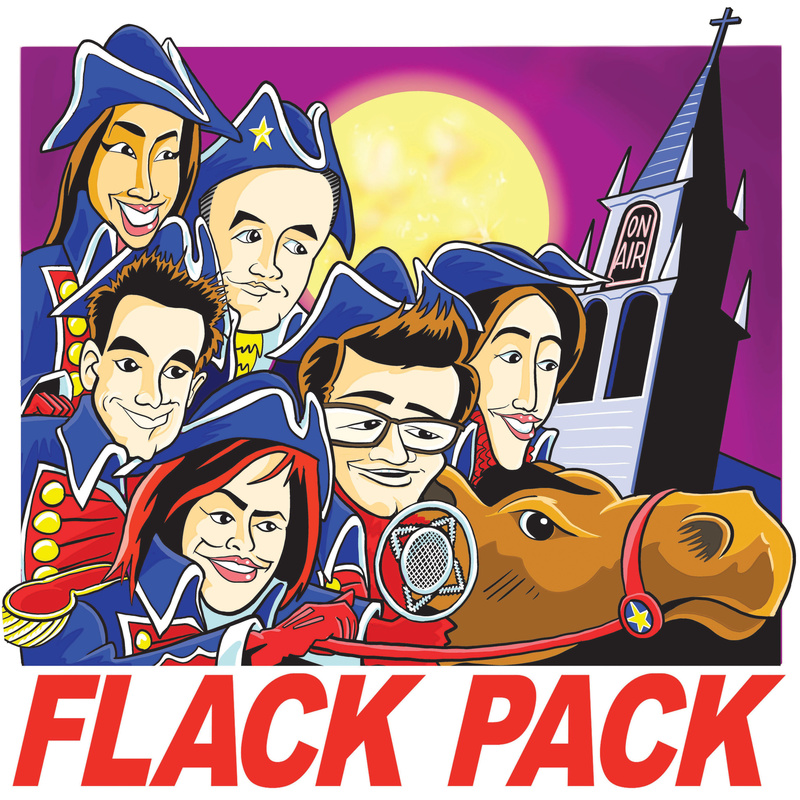 Flack Pack is the official public relations podcast of Washington, D.C., focused on PR issues, techniques, news, and topics of interest to flacks everywhere, especially in the Swamp!

A new report card that considers PR leadership has been issued by the Plank Center for Leadership in Public Relations. It’s the third time the card has been issued since 2015, and once again, the grades are not great.

Is PR in a rut? Robert asks that question and discusses the results of the latest Plank Center Leadership Report Card with one of its authors, Dr. Bruce Berger, at the University of Alabama.

Our Buzzer Beater player today manages communications for a well-known Washington, D.C. media outlet, but how well does he know AP Style? The answer is revealed on this new round of PR’s only podcast quiz show. Time travelling interns Sarah Shelson and Sharon Osano cook up a report about a fast food campaign that traded burgers for fries in their latest installment of our history feature, PR Rewind.

And O’Dwyer’s Associate Editor Steve Barnes is along with the week’s biggest PR headlines, reporting from the Flack Pack studio inside the O’Dwyer’s newsroom in New York City.

The Pizza Box Hasn’t Evolved in Decades, but Now Pizza Hut Is Trying out a New Round Design

When we hear from journalists that all they want is a one or two sentence story pitch, we have to weigh whether the media kit is still worth the effort. Certainly, digital kits with logos, infographics, and photos have utility. But in the Internet age, what about kits you can hold in your hand? Where do those add value? Or do they? Recently, students in Bill Zimmerman’s PR Media and Methods class at Penn State considered the old-school media kit and ways to make them better. Robert caught up with Zimmerman to find out how the students did, creating media kits for the university’s new Roaring Lion food truck, and the lesson these budding PR pros have for the rest of us.

Also, Robert and Jessica play a very fashionable round of the Buzzer Beater, while Flack Pack interns Sarah and Sharon revisit a 1929 PR campaign inspired by a classic novel. Finally, Steve Barnes delivers the week’s biggest PR news headlines in his report from the O’Dwyer’s PR newsroom in New York City.

Listen to The American Family Robinson

deal-critics4.pdf">The National Association of Manufacturers and Public Relations during the New Deal

What’s more credible? Earned media or paid media? The question is as old as the disciplines of advertising and public relations themselves. We think stories reported by journalists, that we placed, are more believable than a memorable television ad. But is that true? Are we right to think so? Robert examines a study on the topic with Dr. Julie O’Neil, Associate Dean at the Bob Schieffer College of Communication at Texas Christian University.

And Steve Barnes reports the latest PR news headlines from the O’Dwyer’s PR newsroom in the Big Apple.

The Buzzer Beater returns next week!

Banksy's Shredded Painting Stunt Was Viral Performance Art. But Who Was Really Trolling Who?

Rate and Review on Apple!

When you look at your media list, where are the trade media outlets? Are they at the top or the bottom? If they’re not the first newsrooms you pitch, your strategy may be outdated. That’s because the audience continues to shift away from mainstream media to sources focused on specific issues or topics.

Mainstream outlets will always have a role, but there’s no doubting they’ve dropped beats, cut staff, and focused their resources on only the biggest national and local stories.

Robert’s guest, Scott Nover, is a freelance journalist writing about media and politics for pubs like the Washington Post and The Atlantic. He tells PR pros not to worry.

This week’s Buzzer Beater contestant fights hard to fulfill her AP Stylebook destiny. Also, we have the latest PR news headlines from O’Dwyer’s Associate Editor Steve Barnes reporting from New York City. And Flack Pack interns Sharon and Sarah set the PR time machine for the moment in 1985 when an important cause was born.

The Atlantic: Stories by Scott Nover

Love it or hate it, we all have to measure our PR campaigns. How did we do? Did we accomplish the goal? What were the results?

This week, we explore a new method of measuring PR campaigns, in reverse. Robert gets the scoop on a fresh way to evaluate your next communications project with Air Force Capt. Katie Cousins, the PR pro who invented the Sight Model.

Today’s Buzzer Beater guest is a friend of the family, but does he recognize the voice on the other end of the call? We’ll find out.

On PR Rewind, our time traveling interns, Sarah Shelson and Sharon Osano, celebrate the 179th birthday of a cartoonist who gave us a famous logo still in circulation today. They’ll tell us more about the man who used his cartoons to take out a crooked power broker.

Greta Thunberg to climate-focused UN: ‘You have stolen my childhood… with empty words.’

Sight Model: An Analysis and Evaluation of Your Campaign Performance

This week on the Flack Pack, we celebrate the work of pioneer journalist Jack O’Dwyer who launched a newsletter in 1968 that today continues to set the standard for PR industry coverage.

Jack was a friend and watchdog to the public relations business until his passing last December at age 85.

John shares with Robert his father’s legacy and discusses the Flack Pack’s new partnership with the iconic publication.

Also, Sarah Shelson and Sharon Osano debut their fall series, PR Rewind, a weekly peek into the annals of PR history. Each Friday, they’ll take us for a ride in their PR time machine, visiting the people, places, and events that shaped the industry.

Jack O’Dwyer, Newsletter Publisher and ‘Soul and Conscience’ of PR Industry, Dies at 85

The idea of public education in America is older than the nation itself, with the first school, the Boston Latin School, opening in 1635. John Hancock and Samuel Adams went there. Benjamin Franklin dropped out.

Robert celebrates the start of another school year with two communicators, Rich Bagin, the Executive Director of the National School Public Relations Association, and Cody Kennedy Communications and Media Manager for the Olathe School District, in Olathe, Kansas.

Also, we get a crash course in education style courtesy of the AP Stylebook, in two rounds of America’s favorite PR podcast quiz show, the Buzzer Beater.

Back to School Statistics

Jack O'Dwyer, newsletter publisher and 'soul and conscience' of PR industry dies, at 85

How PR Pros Can Find New Audiences Through Podcasts

Today, we pause to remember an event that changed the world forever, the terror attacks of September 11, 2001.

Next week, Americans, and our allies around the globe, will reflect on the attacks against four flights full of fathers, mothers, sons and daughters, business executives, parents, students, and children.

Speeches will be delivered. Wreaths will be laid. Survivors will be profiled. And security protocols will be revisited. Media coverage will remind society of the horrors many remember and educate those too young to recall.

In this very special conversation, Robert visits with two veteran communicators, Brian Turmail and Nico Melendez, asking them to share their memories, not just from the day of the attacks, but also of the PR work that resulted once Congress created the Transportation Security Administration.

Brian and Nico were hired to handle TSA’s media relations and eventually became Robert’s trusted deputies as the three of them worked long days and nights to explain the changes to transportation security at a time of extreme concern that the September attacks might not be the last.

The trio reflects on what happened, how they handled the crush of media inquiries and criticism, and the crisis management lessons learned then that still apply today.

9/11: Three Hours Of Terror And Chaos That Brought A Nation To A Halt

Labor Day is here! It’s the perfect time to talk about finding your next, or first, PR job. On this bonus holiday episode of the Flack Pack, Robert wraps up the PR Summer School series with Stephanie Ranno, a recruitment expert working for TorchLight Hire, a firm that helps companies find marketing and communications talent. She offers tips for finding the next job, and confirms that this fall’s job market will be white hot!

Our games and features get the day off, but they’ll return in a couple of weeks.

Five tips to prepare for a job in public relations

Interviewing for a PR job? Prepare for these 5 common questions

The Internet is full of data about the PR Industry. The Bureau of Labor Statistics says more PR people work in Washington, D.C. than any other city in the U.S., including New York City! If you happen to be one of those already employed, but are looking to change jobs, this fall will be a good time to do it. The same goes for those, including students, who still are looking for the perfect position. With a recession predicted by the end of next year, employers are rushing to build teams now.

In recognition of Labor Day, we’re talking about PR jobs with two recruiters. One today, and one on Monday. Robert’s guest today is Brian Phifer, CEO of Phifer and Company, based in New York. But a word of warning: If you can’t handle the truth, you may want to download a podcast about gardening, because Brian’s advice might sting a little.

Also we dub Shalon Roth the latest contributor to the Flack Pack by testing her knowledge of AP Style in a royal competition you won’t want to miss!